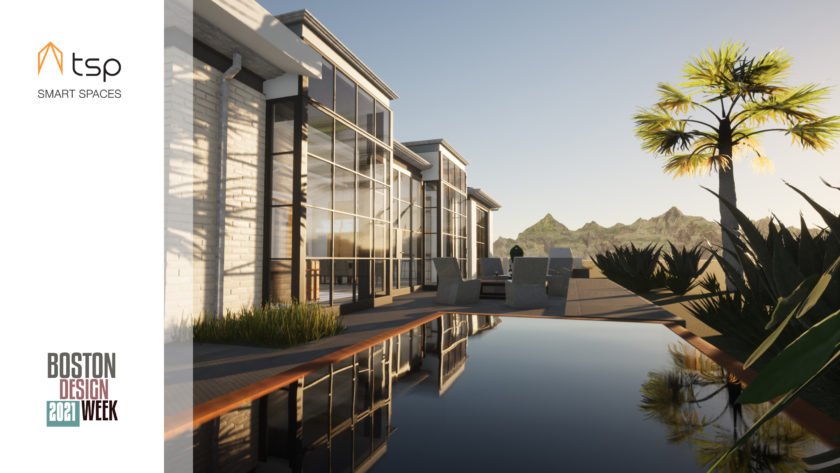 TSP Smart Spaces was thrilled to have so many people attend our live webinar on next generation design tools as part of Boston Design Week. From Matterport and Twinmotion to a live demonstration from the team at Modus VR, we highlighted some of the most revolutionary technology changing the world of design and architecture.

If you missed our live webinar or want to rewatch certain sections in more detail, we’ve got you covered! Check out the recording below as well as our transcript of the event. If you have any questions about anything shown during this event, please don’t hesitate to contact us!

Adam Fisk – Director of IT Services: Hi everyone, so we can get started today. I want to officially welcome everyone to the TSP Smart Spaces, Boston Design Week webinar, covering what we see is really the next generation of design tools, our time today will feature Michael Oh, President and Founder of TSP, as well as Aaron Stallings, TSP’s Director of Smart Spaces. My name is Adam Fisk, I am the Director of IT Services here at TSP and will be acting kind of as your host/ringleader and everything else of sorts.

I will also be joined in later today by Ken and Patrick from Modus VR, and really throughout our time today we’re going to hit on a number of really really fascinating topics and even some real time demos of some of the systems were wanting to show off, and we invite you to really open as many questions as you wish, via the Q&A section in your Zoom window.

At the end of our time today will be answering as many of these questions as we have time for.

But at the end we’ll be sending everyone who registered a copy of the recording, as well as a transcript of the questions we didn’t have time to answer included in that recording will also be the more full resolution versions of what we’re showing as we are doing this over Zoom.

So some of the content may be a little bit more choppy than we intend. So with all that said, I’m going to pass it over to Michael oh and we can get this webinar started.

Michael Oh – President: Thank you, Adam, and it’s good for everyone to join us for this Boston Design Week, events, about next generation design tools, just a quick little blurb about who TSP is, we were founded about 29 years ago.

And we started in the IT space but actually now work in lots of different areas where technology and design intersect so we do Smart Home design for projects, both in Boston, as well as all over the country and even in Iceland, we do commercial AV work. We’ve done work once again in the US and then across the seas in the UK for clients like Accel Partners. That’s a photo from them and we also have a design consultancy that works in larger projects, not just implementation but really helping advise designers, architects in technology. So we do smart building consulting. That’s the 10 World Trade project in The Seaport that we working with the Sasaki and BGI on that project, and also working in the empty space so helping with technology for condominiums, and multi-dwelling units all over. So, we have a lot of different hands and a lot of different areas around technology around design.

We’ve come across a lot of things a lot of technologies and we’ve sort of put this together in today’s presentation now, we’re not architectural workflow experts we’re not here to tell you how to change or run your firm and how you know how to do things differently what we wanted to do is really just introduced and hopefully open your eyes to some of the new trends that are happening in this space because it’s moving so so quickly. And so, you know, you know, hopefully you’ll find this this time, you know, very useful, and we’ll dive right in and talk about three different tools. But first, I just wanted to set the stage a little bit.

Set the stage: the Metaverse Generation

And, you know, I can sort of describe what’s going on today, in the world of visualization, real-time rendering as almost a product of what I’d call the metaverse generation. So the metaverse is just another word for alternate universes and alternate realities. But in the world today, that’s all video gaming. I mean every, a lot of the video games that are out there, you know from Minecraft, Fortnite or in worlds that are being rendered on all you know in real time.

And, you know, there’s a lot of technology that’s gone into that, of course, maybe that is or isn’t sort of useful to architecture and design but we’re finding that it is becoming more and more relevant.

And it’s relevant in a couple of different ways. I mean, first off, Minecraft, you know, is probably one of the first kind of “blank slate” and “build your own world.”

Very popular, it has 131 million active users. It was first released in 2009. And what that means is that you know you have people and kids. Maybe they’re six years old and picked up you know their first mobile device. I mean this is also the time that the mobile device boom, the gaming mobile gaming boom, also happened. And, you know, over that course of 12 years they were immersed in these different alternate universes and those kids are now 18. They’re starting to learn about the real world, starting to find professions.

And the reality is quite a few people, their introduction to architecture was through gaming. They’re able to go into a world blank slate create find, find some materials, create buildings, create environments all on their own and without the constraints of the real world, right, without the constraints of physics, without the constraints of project management, you know they’re able to create all of these worlds in hours if not minutes, and there’s something about that creativity that that sort of comes with the, you know, having a blank slate having this metaverse that you can play and, and it has started to bleed over I mean even Bjarke Ingels, you know, of course, part of a very prominent architecture firm in Denmark has been quoted to say that architecture should be more like Minecraft. Not that it should look like it we certainly all agree on that point but more than it should have that creativity and interactivity.

That Minecraft allows and you know all of these other video games. And I think that attitude of, you know, a whole generation of people coming into these different professions, with a whole different set of tools and technologies and that’s really you know what we want to talk about today.

And really, you know, all three of these play in this idea around virtual worlds, and the real world, but of course it’s all about the real world, in terms of architecture and design.

But how can we communicate things that maybe don’t exist, maybe exist in our minds, and we as designers are trying to get out there to the clients or in other ways.

Matterport and working in 4D

So we’ll start with a very straightforward tool called Matterport. You may have seen this especially if you’ve done any buying of home recently it’s a very popular platform in real estate. It’s also very popular, there’s another platform called Listing 3D, but what it does is very much the same thing and of course Matterport captures spaces, virtually.

So you know you’re looking for a home. You can walk through that home, different versions of this technology have been around for a long time but they really seem to have gotten a lot of traction in the real estate space. And part of the reason is the development of consumer cameras like the one that’s how that I have here and that’s on screen. That’s the Ricoh Theta Z1. There’s a version of it that’s a little bit lower resolution, that’s $500 this camera’s $1,000.

And, you know, it may sound expensive for what it is but as a professional tool it’s really nothing, especially for the value that we got out of it that people get out of it.

And it means that you can capture a space of room in minutes. A 7,000 square foot house maybe in an hour or two, going through the space and and basically just using your phone and using this camera to capture the space.

It really captures everything like a snapshot in time, I mean, I think we’ve all been in a situation where we go on-site we take photos of things that we think that matters but we walk away and we realize a two or three days later, we have the wrong photos, we need detail on the ceiling or on the floor something we didn’t anticipate and doing these characters with Matterport just, you know, makes that problem go away, everything’s captured.

Does Your Conference Room AV Project Need an Acoustic Consultant?